as Pipe Major. Alisdair takes the reigns from Pipe Major Iain MacPherson, who will remain within the piping ranks.

Alisdair has vast experience having previously been Pipe Major of Western

Australia Police Pipe Band, before moving to the UK. He played during a successful

collaboration via the National Youth Pipe band of Scotland.

On his appointment, Alisdair said:

Band. As a young piper growing up in Perth, Australia, the Strathclyde Police Pipe Band, as

it was known then, were one of the top bands which inspired me throughout my musical

development. To now have the opportunity to lead such an important and iconic band is a

I would like to most importantly thank Iain for his dedication, leadership and support to

Henderson and the rest of the team, as we look to further build a solid foundation into

next season and beyond.”

“ I’m delighted with the appointment of Alisdair McLaren as Pipe Major. Alisdair brings

with him a wealth of experience at the highest level, knowledge and enthusiasm; all

necessary attributes when striving for success. I am positive that together we will build a

band as Pipe Major. He has been a driving force in building a young band with huge

potential for the future and I am grateful for the time I had working with him. I am

delighted he will be continuing as part of the team going forward.

I look forward to what are exciting times ahead for the Glasgow Police Pipe Band.”

to serve as Pipe Major after my retirement from the Police in 2012.

folding during a most difficult phase several years ago. In that regard, many thanks are due

I feel that, as Pipe Major, I was in a bit of a “caretaker “ role recently, whilst trying to build

for the future. It’s really pleasing that positive interest in the band is on the rise again from

Police Scotland and the worst years are behind us. I’m moving from the central belt for

family reasons, but plan to continue having a tune with the band next season! Good luck

to Alisdair, he has my full backing and ongoing support.”

“ I’d like to extend congratulations to Alisdair McLaren, the new Pipe Major of Glasgow

Police Pipe Band. His experience, drive and musical attributes will serve him well in what is

undoubtedly a challenging but prestigious role. His appointment comes as a result of

succession planning, and he has been instrumental in the last 3 years, along with Iain

MacPherson, in building and continuing to build a pipe corps of talented individuals who

commensurate results at the World Pipe Band Championships. Under Alisdair and David

Henderson, I anticipate that the future of the band is very healthy. In addition, our

much as anyone is keenly aware of that: he was Pipe Major of a “full time” Police band in

Australia, a former player with Strathclyde Police Pipe Band and he upholds the standards

which underpin our Police band philosophy. At this time I’d like to thank both Iain

MacPherson and his predecessor, Duncan Nicholson for their unstinting commitment to

making our band the best it could be in the most trying circumstances over recent years.

Indeed, that period was marked with some excellent performances, not least of all, the

“Ceolry” concert. It is a result of their efforts, among other factors, that we are now able to

look forward to an exciting future in a stable and positive environment, supported by the

We would like to thank Pipe Major MacPherson for his leadership and guidance over the past few years. It is due to him that the band is in a much healthier state than it was and the foundations have been laid for a bright future. We look forward to the journey ahead with Pipe Major Alisdair McLaren at the helm!

Biking for the Band 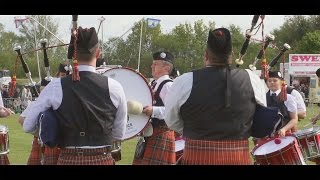 Roll on the season!